This event was made aware to us from an email we received through the forum of our faculty, there wasn’t much information to work from ahead of time before signing up to the event, on the line below to describe the general idea of the lab:

This workshop is designed to give an authentic taste of working on a data-related challenge. The event will enable you to share innovative ideas and forward-thinking solutions to real-life problems in a hackathon-style environment.

Alas I was interested and always love a challenge, so I signed up and a few weeks before the day we got an email from someone at DMA Talent (a division of the IDM, Institute of Direct and Digital Marketing), this contained the following brief with suggested API’s / Datasets to use:

Transport for London have provided the brief for this Lab. Using open data and social media, they’ll challenge you to encourage the public to reconsider their travel options in London and ultimately choose off-peak public transport. This is a big customer base so you’ll have to think creatively. And with business goals including reducing traffic and pollution as well as keeping commuters healthy, there will be lots to think about!

Unfortunately, I did not come up with a general idea for a solution prior to the day, although in the opening ceremony we were given a few options to combat, the one we ended up solving (along with one other team) was the following:

Prior to the opening ceremony we were split into teams of 4, my team consisted of me, Kira Nolte and Jasmine Sibeal who are both first year students at MMU as well, then Donika, an ex Chemistry student who graduated from UoM in 2014.

How we planned to solve this issue was through a rewards scheme, similar to Cafe Nero and Starbucks work, at the beginning it was very rough but over the short time we had (less than 4 hours) it became more refined.

Having attended a few labs and Hackathons before, I did heavily guide us as a team, suggesting approaches and how we should conduct our research, what we should be focusing on and trying to distribute tasks.

After refining our idea, letting Donika produce a User Journey, which I heavily recommended, then leaving Kira and Jasmine to work on the Marketing and a few statistic, I worked on Case Studies.

The first study I conducted was on the effectiveness of Gamification, how it increases step counts, luckily I was able to find a very good paper on Pokemon Go (pdf), “Gotta catch’em all! Pokémon GO and physical activity among young adults: difference in differences study”.

In this study I was able to extract that during the first week of release, players of Pokemon Go walked roughly 1000 more steps then those that did not play the game, half of which did fit into our age demographic (25+ years of age).

Another extracted piece of data was this trend of 1000 more steps on average a day did decrease during the following weeks, but we hope to prevent this in our use case via the rewards system we plan to implement.

Another issue that was brought up was the unpopularity of the “TfL Oyster” App and how ineffective it might be implementing our idea into, which is why I choice this as my next case study.

Apps similar to ours would be ones that allowed payment for a service (which you can do via the Oyster App, as a replacement to your Oyster card or other contactless payment method) but also offered a rewards system, due to this, I looked at the coffee apps (due to their popularity).

During research I found that the Startbucks App had 476,141 downloads on Android, which is a fair sum and higher than any other (Costa having 6,930 downloads for example), this promoted further research on Startbucks and their strategy.

On this article I found that in America 23.4 Million people used the Starbucks app for mobile transactions, which is more than Apple Pay at 22 Million and Google Pay at 11.1 Million.

Clearly Starbucks is doing something right and TfL might want to further research into this for their Oyster Card App, but the article mentioned three main strategies they used and we implemented into our idea.

The first was “Omnichannel Marketing”, which ensured we thought about user and how accessible their data is, multiple card usage and how we planned our marketing campaigns.

The second was the most important, “Location-Based Services”, which lead to us thinking about giving the user a notification through their phone if walking is quicker, which would help them to their reward.

This could work multiple ways, but if it’s through the Oyster App, it can know your regular commutes and can easily know any changes to your daily commutes to work, which was aimed at the demographic we wanted (regular commuters to work).

Then the third was “User-Generated Content”, which we already covered by us by our “Fitness Tracking” feature and Gamification, allowing users to be challenged by their friends (linked up by Facebook or Twitter).

Going on from this point we did put it could be “linking up with existing social media, work and/or FitBit”, but it was pointed out we missed an opportunity to mentioned how we can fit into their platform, or theirs in ours via a possible API.

We were the winning team, winning a £20 Amazon gift card each, but all of us came up with good ideas and studied the data well, coming up with good solutions in a very short amount of time, if they run this event again with a different brief I definitely would attend.

The slides are on my Google Drive, but were put together within the last hour, so Unfortunately they are slightly rough and don’t completely stand on their own I think, but either way I enjoyed myself and my team. 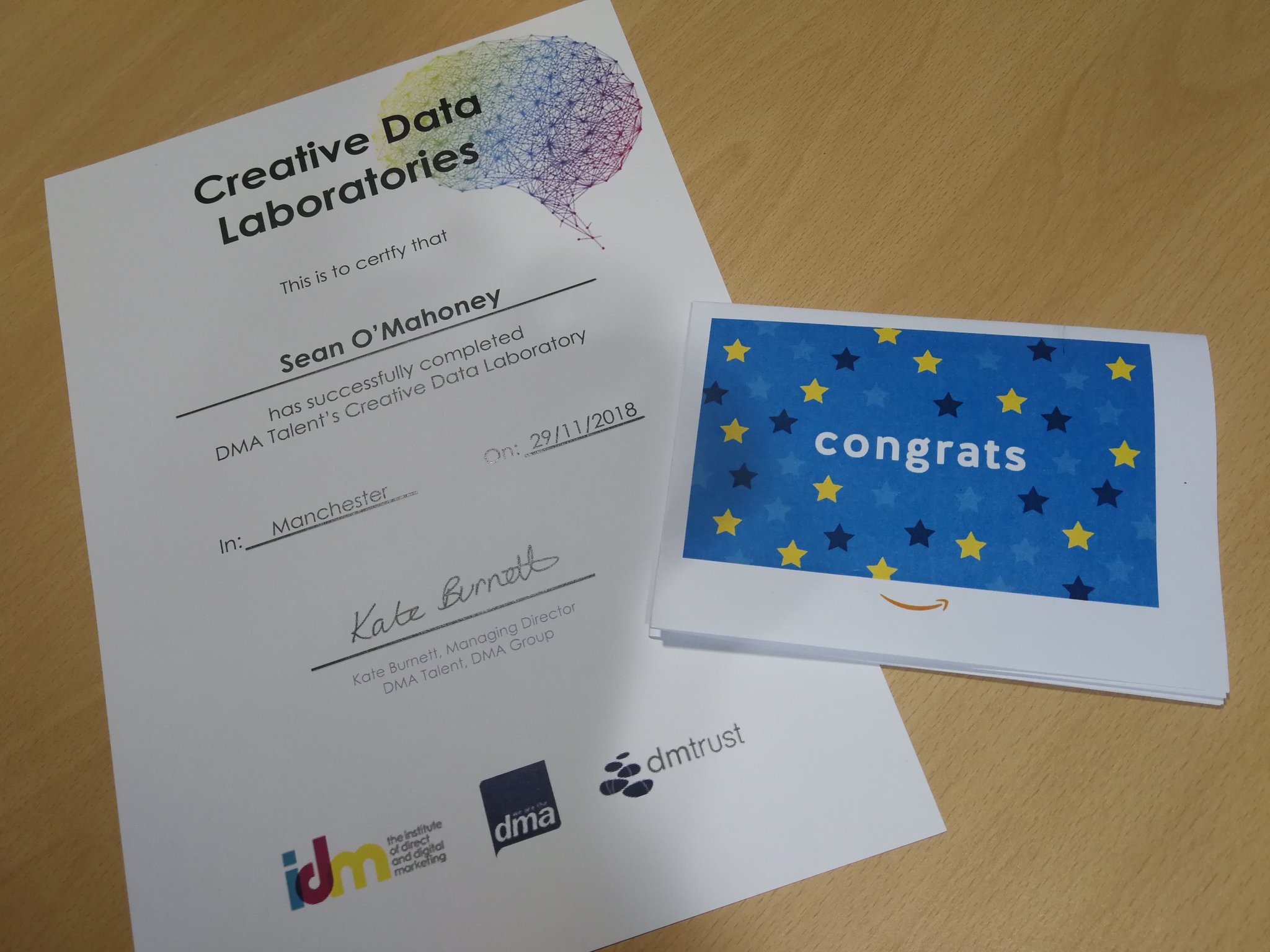